Vessel traffic services - VTS - are shore-side systems which range from the provision of simple information messages to ships, such as position of other traffic or meterological hazard warnings, to extensive management of traffic within a port or waterway. 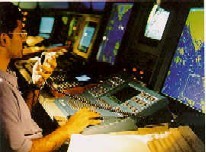 Generally, ships entering a VTS area report to the authorities, usually by radio, and may be tracked by the VTS control centre.

Ships must keep watch on a specific frequency for navigational or other warnings, while they may be contacted directly by the VTS operator if there is risk of an incident or, in areas where traffic flow is regulated, to be given advice on when to proceed.

SOLAS Chapter V (Safety of Navigation) states that governments may establish VTS when, in their opinion, the volume of traffic or the degree of risk justifies such services.

The development of VTS

Traditionally, the master of a ship has been responsible for a ship's course and speed, assisted by a pilot where necessary. Ships approaching a port would announce their arrival using flag signals.

The world's first harbour surveillance radar was inaugurated in Liverpool, England, in July 1948 and in March 1950, a radar surveillance system was established at Long Beach, California - the first such system in the United States. The ability of the coastal authority to keep track of shipping traffic by radar, combined with the facility to transmit messages concerning navigation to those ships by radio, therefore constituted the first formal VTS systems.

The value of VTS in navigation safety was first recognized by IMO in resolution A.158 (ES.IV) Recommendation on Port Advisory Systems adopted in 1968, but as technology advanced and the equipment to track and monitor shipping traffic became more sophisticated, it was clear guidelines were needed on standardising procedures in setting up VTS. In particular, it became apparent that there was a need to clarify when a VTS might be established and to allay fears in some quarters that a VTS might impinge on the ship's master's responsibility for navigating the vessel.

As a result, in 1985, IMO adopted resolution A.578 (14) Guidelines for Vessel Traffic Services, which said that VTS was particularly appropriate in the approaches and access channels of a port and in areas having high traffic density, movements of noxious or dangerous cargoes, navigational difficulties, narrow channels, or environmental sensitivity. The Guidelines also made clear that decisions concerning effective navigation and manoeuvring of the vessel remained with the ship's master. The Guidelines also highlighted the importance of pilotage in a VTS and reporting procedures for ships passing through an area where a VTS operates.

Revised Guidelines for vessel traffic services, including Guidelines on Recruitment, Qualifications and Training of VTS Operators, were adopted as Assembly resolution A.857(20) in November 1997.

Vessel Traffic Services were not specifically referred to in the International Convention for the Safety of Life at Sea (SOLAS) 1974, but in June 1997 IMO's Maritime Safety Committee adopted a new regulation to Chapter V (Safety of Navigation), which set out when VTS can be implemented.

A revised SOLAS chapter V on Safety of Navigation was adopted in December 2000, and entered into force on 1 July 2002. Regulation 12 Vessel traffic services states:

IALA IAPH IMPA World VTS Guide - This service has been terminated by the service provider.