Images of oiled seabirds with a stricken tanker in the background are, thankfully, rarer than the news media might have the general public believe. Yet when there is an incident, coastal States need to be prepared. The issue of "places of refuge" is one aspect of contingency planning in the consideration of which the rights and interests of coastal States as well as the need to render assistance to vessels that are damaged or disabled or otherwise in distress at sea ought to be taken into account.
In November 2003, the IMO Asembly adopted two resolutions addressing the issue of places of refuge for ships in distress - an important step in assisting those involved in incidents that may lead to the need for a place of refuge to make the right decisions at the right time.
Resolution A.949(23) Guidelines on places of refuge for ships in need of assistance are intended for use when a ship is in need of assistance but the safety of life is not involved. Where the safety of life is involved, the provisions of the SAR Convention should continue to be followed.
The guidelines recognize that, when a ship has suffered an incident, the best way of preventing damage or pollution from its progressive deterioration is to transfer its cargo and bunkers, and to repair the casualty. Such an operation is best carried out in a place of refuge. However, to bring such a ship into a place of refuge near a coast may endanger the coastal State, both economically and from the environmental point of view, and local authorities and populations may strongly object to the operation.
Therefore, granting access to a place of refuge could involve a political decision which can only be taken on a case-by-case basis. In so doing, consideration would need to be given to balancing the interests of the affected ship with those of the environment.
A second resolution, A.950(23) Maritime Assistance Services (MAS), recommends that all coastal States should establish a maritime assistance service (MAS). The principal purposes would be to receive the various reports, consultations and notifications required in a number of IMO instruments; monitoring a ship's situation if such a report indicates that an incident may give rise to a situation whereby the ship may be in need of assistance; serving as the point of contact if the ship's situation is not a distress situation but nevertheless requires exchanges of information between the ship and the coastal State, and for serving as the point of contact between those involved in a marine salvage operation undertaken by private facilities if the coastal State considers that it should monitor all phases of the operation.
The need to review the issues surrounding the need for places of refuge was included in a list of measures aimed at enhancing safety and minimizing the risk of oil pollution, drawn up in December 2000 in response to the Erika incident of December 1999.
Further urgency to the work came in the aftermath of the incident involving the fully laden tanker Castor which, in December 2000, developed a structural problem in the Mediterranean Sea. In early 2001, IMO Secretary-General Mr. William O'Neil suggested that the time had come for the Organization to undertake, as a matter of priority, a global consideration of the problem of places of refuge for disabled vessels and adopt any measures required to ensure that, in the interests of safety of life at sea and environmental protection, coastal States reviewed their contingency arrangements so that such ships are provided with assistance and facilities as might be required in the circumstances.
The November 2002 sinking of the Prestige further highlighted the issue.
Background on places of refuge
The notion of providing refuge for ships in distress was raised at IMO during the late 1980s, when the Legal Committee was considering the draft provisions of the International Convention on Salvage (eventually adopted in 1989). At the time, it was suggested that there should be an obligation on States to admit vessels in distress into their ports. Although this was endorsed by some delegations, others expressed doubt on the desirability of including such a "public law" rule in a private law convention. It was also pointed out that the interests of coastal States would need to be duly taken into account in any such provision. Doubt was also expressed whether such a provision would in fact affect the decisions of the authorities of coastal States in specific cases.
As a result, Article 11 of the Salvage Convention , as eventually adopted, reads: "A State Party shall, whenever regulating or deciding upon matters relating to salvage operations such as admittance to ports of vessels in distress or the provisions of facilities to salvors, take into account the need for co-operation between salvors, other interested parties and public authorities in order to ensure the efficient and successful performance of salvage operations for the purpose of saving life or property in danger as well as preventing damage to the environment in general."
The issue of refuge for ships in need of assistance was brought to the fore again when a working group of IMO's Maritime Safety Committee (MSC), established in December 2000 to consider post-Erika safety-related issues, listed "ports of refuge" among the topics selected for further consideration. 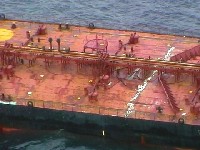