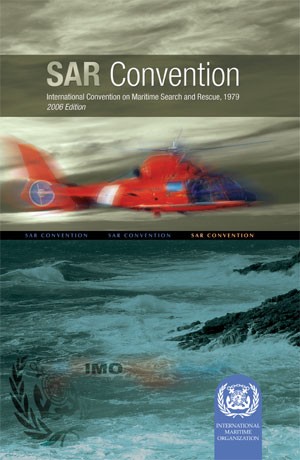 The 1979 Convention, adopted at a Conference in Hamburg, was aimed at developing an international SAR plan, so that, no matter where an accident occurs, the rescue of persons in distress at sea will be coordinated by a SAR organization and, when necessary, by cooperation between neighbouring SAR organizations.

Although the obligation of ships to go to the assistance of vessels in distress was enshrined both in tradition and in international treaties (such as the International Convention for the Safety of Life at Sea (SOLAS), 1974), there was, until the adoption of the SAR Convention, no international system covering search and rescue operations. In some areas there was a well-established organization able to provide assistance promptly and efficiently, in others there was nothing at all.

The technical requirements of the SAR Convention are contained in an Annex, which was divided into five chapters. Parties to the Convention are required to ensure that arrangements are made for the provision of adequate SAR services in their coastal waters.

Parties are encouraged to enter into SAR agreements with neighbouring States involving the establishment of SAR regions, the pooling of facilities, establishment of common procedures, training and liaison visits. The Convention states that Parties should take measures to expedite entry into its territorial waters of rescue units from other Parties.

The Convention then goes on to establish preparatory measures which should be taken, including the establishment of rescue coordination centres and subcentres. It outlines operating procedures to be followed in the event of emergencies or alerts and during SAR operations. This includes the designation of an on-scene coordinator and his duties.

Parties to the Convention may establish ship reporting systems to facilitate search and rescue operations, under which ships report their position to, for example, a coast radio station. This enables the interval between the loss of contact with a vessel and the initiation of search operations to be reduced. It also helps to permit the rapid determination of vessels which may be called upon to provide assistance including medical help when required.

Following the adoption of the 1979 SAR Convention, IMO's Maritime Safety Committee divided the world's oceans into 13 search and rescue areas, in each of which the countries concerned have delimited search and rescue regions for which they are responsible.

Provisional search and rescue plans for all of these areas were completed when plans for the Indian Ocean were finalized at a conference held in Fremantle, Western Australia in September 1998.

The 1979 SAR Convention imposed considerable obligations on Parties - such as setting up the shore installations required - and as a result the Convention was not being ratified by as many countries as some other treaties. Equally important, many of the world's coastal States had not accepted the Convention and the obligations it imposed.

It was generally agreed that one reason for the small number of acceptances and the slow pace of implementation was due to problems with the SAR Convention itself and that these could best be overcome by amending the Convention.

At a meeting in October 1995 in Hamburg, Germany, it was agreed that there were a number of substantial concerns that needed to be taken into account, including:

IMO's Sub-Committee on Radiocommunications and Search and Rescue (COMSAR) was requested to revise the technical Annex of the Convention. A draft text was prepared and was approved by the 68th session of the MSC in May 1997, and was then adopted by the sixty-ninth session of MSC in May 1998.

The revised technical Annex of the SAR Convention clarifies the responsibilities of Governments and puts greater emphasis on the regional approach and co-ordination between maritime and aeronautical SAR operations.

This Chapter updates the original chapter 1 of the same name.

Replaces the 1979 Chapter 2 on Organization. The chapter has been re-drafted to make the responsibilities of Governments clearer. It requires Parties, either individually or in cooperation with other States, to establish basic elements of a search and rescue service, to include:

Parties should establish search and rescue regions within each sea area - with the agreement of the Parties concerned. Parties then accept responsibility for providing search and rescue services for a specified area.

The chapter also describes how SAR services should be arranged and national capabilities be developed. Parties are required to establish rescue coordination centres and to operate them on a 24-hour basis with trained staff who have a working knowledge of English.

Parties are also required to "ensure the closest practicable co-ordination between maritime and aeronautical services".

Replaces the original chapter 3 on Cooperation.

Requires Parties to coordinate search and rescue organizations, and, where necessary, search and rescue operations with those of neighbouring States. The chapter states that unless otherwise agreed between the States concerned, a Party should authorize, subject to applicable national laws, rules and regulations, immediate entry into or over its territorial sea or territory for rescue units of other Parties solely for the purpose of search and rescue.

The chapter says that each RCC (Rescue Coordination Centre) and RSC (Rescue Sub-Centre) should have up-to-date information on search and rescue facilities and communications in the area and should have detailed plans for conduct of search and rescue operations. Parties - individually or in cooperation with others should be capable of receiving distress alerts on a 24-hour basis. The regulations include procedures to be followed during an emergency and state that search and rescue activities should be co-ordinated on scene for the most effective results. The chapter says that "Search and rescue operations shall continue, when practicable, until all reasonable hope of rescuing survivors has passed".

2004 amendments - Persons in distress at sea

The amendments to the Annex to the Convention include: