The Organization recognizes the importance of  marine safety investigations into marine casualties and marine incidents to prevent reoccurrence and to promote maritime safety and prevent pollution. IMO encourages full cooperation between States in the conduct of investigations, the recognition of mutual interest and the exchange of information regarding investigations. The IMO legal framework provides a common and consistent approach for States to adopt in the conduct of marine safety investigations. In this context, marine safety investigations do not seek to apportion blame or determine liability and are conducted with the sole objective of identifying those factors that contributed to the accident such that measures can be established to prevent similar marine casualties and marine incidents in the future. As per its terms of reference, the Sub-Committee on Implementation of IMO Instruments (III) is tasked to consider technical and operational matters related to the analyses of investigations reports into marine casualties and incidents and to maintain an efficient and comprehensive knowledge-based mechanism to support the identification of trends to inform the IMO rule-making process, as appropriate.

Under the United Nations Convention on the Law of the Sea (UNCLOS), article 94 on Duties of the flag State, paragraph 7: "Each State shall cause an inquiry to be held by or before a suitably qualified person or persons into every marine casualty or incident of navigation on the high seas involving a ship flying its flag and causing loss of life or serious injury to nationals of another State or serious damage to ships or installations of another State or to the marine environment. The flag State and the other State shall cooperate in the conduct of any inquiry held by that other State into any such marine casualty or incident of navigation".

Under SOLAS regulation I/21 and MARPOL articles 8 and 12, each Administration undertakes to conduct an investigation into any casualty occurring to ships entitled to fly its flag subject to those conventions and to supply the Organization with pertinent information concerning the findings of such investigations. Article 23 of the Load Lines Convention also requires the investigation of casualties. A similar requirement can also be found in article 7 of the Torremolinos Protocol of 1993 relating to the Torremolinos International Convention for the Safety of Fishing Vessel, 1977, which has not yet entered into force, regarding the investigation of casualties to fishing vessels.

In 2008, IMO adopted resolution MSC.255(84) on  International Standards and Recommended Practices for a Safety Investigation into a Marine Casualty or Marine Incident (Casualty Investigation Code) and relevant amendments to SOLAS Chapter XI-1 to make parts I and II of the Code mandatory. Part III of the Code contains related guidance and explanatory material.

SOLAS regulation XI-1/6 became effective on 1 January 2010 and expanded on SOLAS regulation I/21, which only required Administrations to undertake to conduct an investigation of any casualty occurring to any of its ships "when it judges that such an investigation may assist in determining what changes in the present regulations might be desirable". The mandatory provisions of the Code now require a marine safety investigation to be conducted into every "very serious marine casualty", which is defined as a marine casualty involving the total loss of the ship or a death or severe damage to the environment.

Providing IMO with reports on marine casualty and incidents is a treaty obligation for Parties to a number of IMO instruments and the requirement to report is set out in provisions such as SOLAS 1974 regulation I/21, MARPOL articles 8 and 12, LL 1966/1988 article 23 as well as chapter 14 of the Casualty Investigation Code.

Reporting to IMO is done electronically through the Global Integrated Shipping Information System (GISIS), which has a Maritime Casualties and Incidents (MCI) module database containing a unique collection of MCI data, as defined by circulars MSC-MEPC.3/Circ.4/Rev.1 .   The MCI module, which is accessible to the public, contains all marine safety investigation reports submitted to the Organization and all casualty analyses that have been approved by the III Sub-Committee.

The III Sub-Committee has a Correspondence Group and a Working Group on Analysis of Marine Safety Investigation Reports dealing with casualty-related matters and, in particular, the process of analysing marine safety investigation reports to identify potential safety issues. If endorsed by the III Sub-Committee, the potential safety issues may be referred to other relevant IMO bodies for further consideration vis-à-vis the effectiveness of international safety standards, as appropriate. 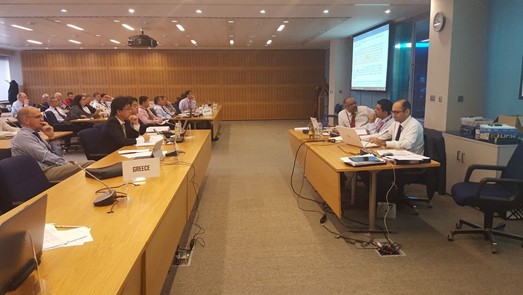 The activity of the groups on casualty analysis is based on the Casualty analysis procedure, which includes a process of analysis of casualty investigation reports, and procedures for evaluating safety issues that need further consideration.

Reporting on casualty investigations provides pragmatic input based on which potential safety issues can be further identified and sent to relevant IMO bodies for appropriate action, such as amendment to, and support to the implementation of, existing regulations, development of new requirements, as well as technical cooperation activities.

Lessons Learned are approved by the III Sub-Committee and are circulated in order to increase awareness, in particular, of seafarers for prevention purposes.