Highlights and Executive Summary of the Fourth IMO GHG Study 2020

– Due to developments in data and inventory methods, this study is the first IMO GHG Study able to produce greenhouse gas inventories that distinguish domestic shipping from international emissions on a voyage basis in a way which, according to the consortium, is exactly consistent with the IPCC guidelines and definitions.1

– Projecting the same method to 2008 emissions, this study estimates that 2008 international shipping GHG emissions (in CO2e) were 794 million tonnes (employing the method used in the Third IMO GHG Study, the emissions were 940 million tonnes CO2e).

– Annual carbon intensity performance of individual ships fluctuated over years. The upper and lower quartiles of fluctuation rates in EEOI of oil tankers, bulk carriers and container ships were around ±20%, ±15% and ±10% respectively. Quartiles of fluctuation rates in other metrics were relatively modest, yet still generally reaching beyond ±5%. Due to certain static assumptions on weather and hull fouling conditions, as well as the non-timely updated AIS entries on draught, actual fluctuations were possibly more scattered than estimated, especially for container ships. 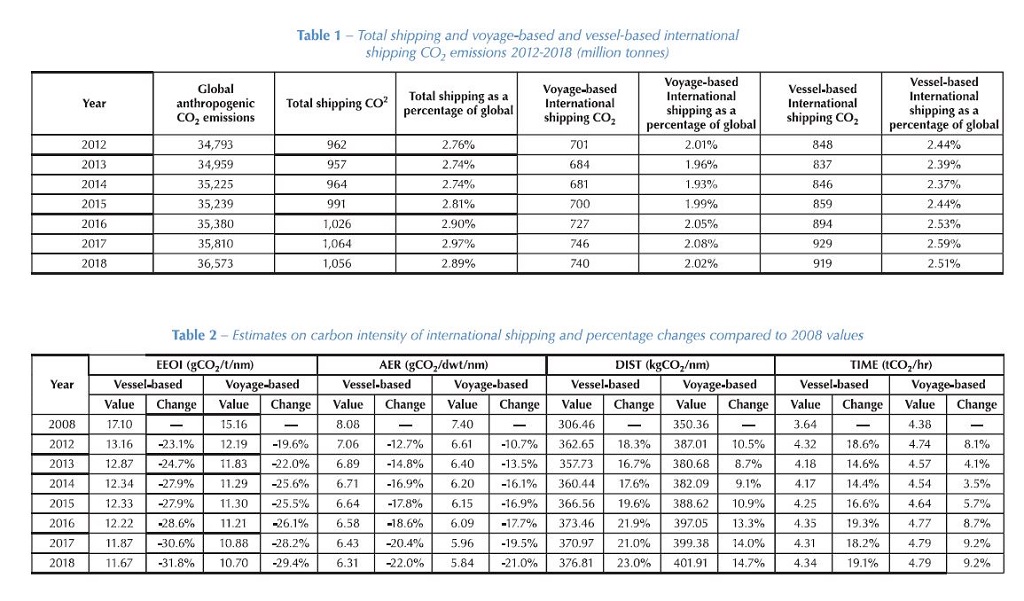 – Emissions could be higher (lower) than projected when economic growth rates are higher (lower) than assumed here or when the reduction in GHG emissions from land-based sectors is less (more) than would be required to limit the global temperature increase to well below 2 degrees centigrade.

– Although it is too early to assess the impact of COVID-19 on emission projections quantitatively, it is clear that emissions in 2020 and 2021 will be significantly lower. Depending on the recovery trajectory, emissions over the next decades maybe a few percent lower than projected, at most. In all, the impact of COVID-19 is likely to be smaller than the uncertainty range of the presented scenarios.


1 The choice of the method to distinguish domestic shipping emissions from international shipping emissions does not interpret existing IMO instruments, nor prejudge any future policy developments at IMO and would not constitute IMO's views on the interpretation of the 2006 IPCC Guidelines on national greenhouse gas inventories.