The Code of Conduct concerning the Repression of Piracy and Armed Robbery against Ships in the Western Indian Ocean and the Gulf of Aden, also referred to as the Djibouti Code of Conduct, was adopted on 29 January 2009 by the representatives of: Djibouti, Ethiopia, Kenya, Madagascar, Maldives, Seychelles, Somalia, the United Republic of Tanzania and Yemen. Comoros, Egypt, Eritrea, Jordan, Mauritius, Mozambique, Oman, Saudi Arabia, South Africa, Sudan and the United Arab Emirates have since signed bringing the total to 20 countries from the 21 eligible to sign. 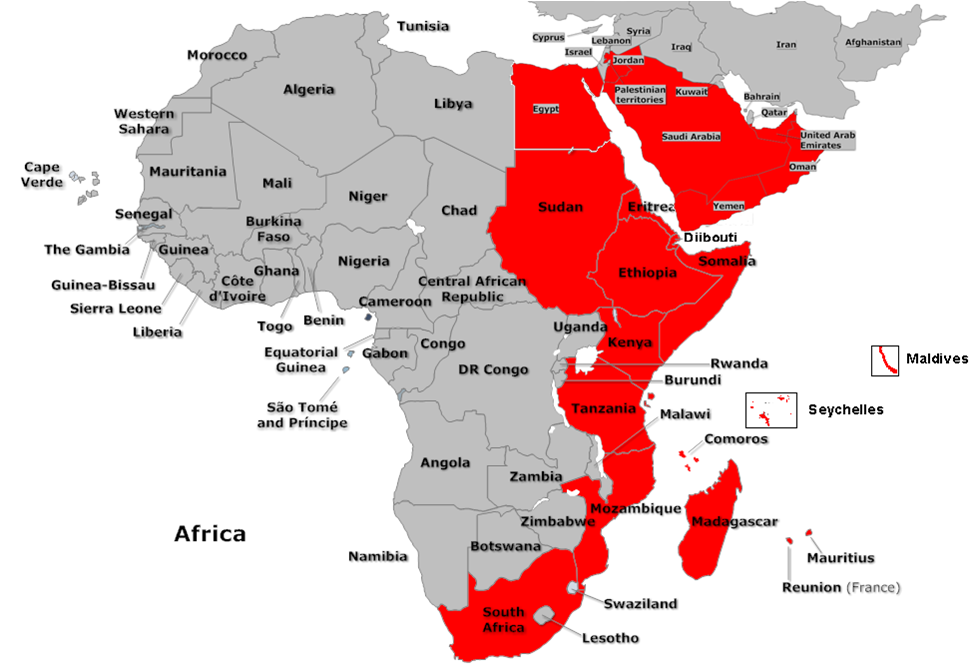 In particular the signatories to the Code have agreed to co-operate, in a manner consistent with international law, in:

(a)The investigation, arrest and prosecution of persons, who are reasonably suspected of having committed acts of piracy and armed robbery against ships, including those inciting or intentionally facilitating such acts

(b)The interdiction and seizure of suspect ships and property on board such ships;

(c)The rescue of ships, persons and property subject to piracy and armed robbery and the facilitation of proper care, treatment and repatriation of seafarers, fishermen, other shipboard personnel and passengers subject to such acts, particularly those who have been subjected to violence; and

(d)The conduct of shared operations – both among signatory States and with navies from countries outside the region – such as nominating law enforcement or other authorized officials to embark on patrol ships or aircraft of another signatory.

In addition, the Code provides a framework for communication, coordination and cooperation under its four thematic broad pillars:

A.   Delivering national and regional training

IMO has been supporting regional training endeavours, conducted under the auspices of the Djibouti Regional Training Centre (DRTC) since 2010. To date, the Organization, in partnership with other international and regional organizations including NATO, EU NAVFOR, East African Standby Force (EASF), Saudi Arabia's Mohammed Bin Nayef Academy of Marine Science and Security Studies, EU MARSIC programme, US AFRICOM and Turkey's International Maritime Security Centre of Excellence, has facilitated 60 training courses, benefiting more than 1000 trainees from the region.

On 12 November 2015, the DRTC building was officially opened in Doraleh, Djibouti. The establishment of a regional training centre was originally recommended by the 2009 Djibouti Meeting, and the centre is intended to play a key role in regional capacity-building initiatives under the Code. IMO will continue to help the Djibouti Regional Training Centre to deliver on its objectives while investing in capacity to implement more programmes in the region.

The signatory States to the Code undertook to review their national legislation with a view to ensuring that there are laws in place to criminalize piracy and armed robbery against ships and to make adequate provision for the exercise of jurisdiction, conduct of investigations and prosecution of alleged offenders.

IMO is working closely with the United Nations Office on Drugs and Crime (UNODC) as well as other international organizations and development partners to assess and assist with upgrading national legislation, focusing on empowering States' law-enforcement forces to conduct arrests and criminal investigations.

The Code provides for sharing of piracy-related information, through its information sharing network established in 2011. The network is centred on the three Information Sharing Centres: the Regional Maritime Rescue Coordination Centre (RMRCC) in Mombasa, Kenya, Maritime Rescue Coordination Centre (MRCC) in Dar es Salaam, United Republic of Tanzania and the Regional Maritime Information Sharing Centre (ReMISC) in Sana'a, Yemen. It is used to exchange information on piracy incidents across the region and other relevant information to help shipping and signatory States to take action to mitigate piracy threats.

Since its establishment, the information sharing network has played a significant role in countering piracy. IMO will continue to support the capacity of the regional network to counter piracy as well as other illicit activities at sea.

IMO is also working to develop signatory States' maritime domain awareness. Projects to increase the use of terrestrial automatic identification systems (AIS), long-range identification and tracking of ships (LRIT), coastal radar and other sensors and systems have been undertaken and continue to be implemented.

IMO has been working with partners to boost the capacity of states in the Western Indian Ocean and Gulf of Aden region to suppress piracy by supporting development of maritime infrastructure, law enforcement and implementation of the Djibouti Code of Conduct. In its endeavour to strengthen capacity in the region IMO has signed five strategic partnerships with UN agencies and the EU. These joint agreements to combat piracy, reaffirm the mutual commitments to improving coordination at all levels and across all relevant programmes and activities, with a view to strengthening the capacity of States in the region to deal with piracy, as well as to help develop viable and sustainable alternatives to piracy.

The evolution of the Djibouti Code of Conduct

Since it was signed in 2009, the Code has evolved to be the major focus for facilitating transnational communication, coordination and cooperation within the region, creating a basis for technical cooperation between the signatory States, IMO and international partners that is trusted, effective and popular.

IMO continues to support Member States to implement the Djibouti Code of Conduct through its Integrated Technical Cooperation Programme (ITCP) and activities funded by the Djibouti Code Trust Fund. It also maintains a presence in the region, focussed on the Code, with four staff members based in Nairobi, Kenya.

The Djibouti Code of Conduct Trust Fund is a multi-donor voluntary fund. Financial contributions may be made by Member States of the United Nations or IMO, organizations, institutions or private individuals to support counter piracy capacity building. Member States and intergovernmental organizations with which the IMO has relations and non-governmental organizations with consultative status are also able to support the efforts of IMO by providing in-kind support.

The Fund remains open for donations to assist the IMO to counter piracy within the Djibouti Code of Conduct framework.