The governing bodies of the London Convention and Protocol, at their joint session held at the Headquarters of the International Maritime Organization, London, from 19 to 23 September 2016, adopted the following statement to encourage action to combat litter:

Recalling the Rio+20 outcome document 'the future we want' paragraph 163, the United Nations Environment Assembly 2 Resolution on Marine plastic litter and microplastics, and the final report of the Review of the current state of knowledge regarding marine litter in waste dumped at sea under the London Convention and Protocol.

Recognizing the progress reported by a number of Contracting Parties to date in highlighting and addressing the particular problems of plastics pollution through measures applied both in the environment and at source;

The Contracting Parties to the London Protocol and the London Convention express concern around the issue of plastic litter and microplastics in the marine environment; and

Encourage Member States to make every effort to combat marine litter, including through the identification and control of marine litter at source and to encourage monitoring, additional study and knowledge-sharing on this issue.

Marine litter in the waste streams under the LC/LP

It is widely recognised that marine litter can have significant ecological, social and economic impacts. A large proportion of marine litter is formed of plastics, which can affect both marine fauna and other legitimate uses of the environment (for example tourism), Litter found in the marine environment sometimes comes from remote industrial or urban sources, as well as sea-based sources. Plastics degrade extremely slowly in the open ocean, and in recent years the existence of microplastics and their potential impact has received increasing attention (see GESAMP Reports and Studies No. 90 ).

As one of the partners in the UNEP-led Global Partnership for Marine Litter (GPML), IMO is co-leading efforts on sea-based sources of marine litter together with FAO (www.fao.org) and within the framework of this partnership, a study on marine litter in relation to the various waste streams under the London Convention and Protocol was commissioned. The report, which was approved by the governing bodies in 2015, can be downloaded from the link to the right.

The report reviews the current state of knowledge and information gaps in relation to litter, specifically plastics, in relation to wastes regulated under the LC/LP. It also discusses areas for further study in order to improve the understanding of the scale, nature and effects of plastics in sediments and sewage, and options for their reduction and/or removal.

Marine disposal of tailings and associated wastes from mining operations

Mining is essential to living as we know it. Mine tailings are what is left over from the mined ore after the target metal (e.g., copper or gold) has been separated from the ore. Separation is achieved by an industrial process using physical grinding and crushing to break the ore into small particles followed by chemical extraction and flotation methods. Mine tailings are known to contain heavy metals, chemical reagents used in the separation process (e.g., cyanide from gold processing), and sulphide-bearing materials.

There are about 2,500 industrial-sized mines operating around the world. Except for a very few, these mines dispose of their mine tailings on-land, usually under water in impoundments or behind dams. However, in some cases mines will dispose of the tailings into rivers and into marine waters.

In May 2008 the Scientific Groups under the London Convention and Protocol considered information related to the nature of marine disposal operations from a number of mines located around the world, including the likely order of contaminant inputs which may be expected to occur as a result. The Scientific Groups noted that while pipeline discharges and other land-based sources of marine pollution fell beyond the regulatory scope of the London Convention and Protocol, the discharge of such tailings may frequently fall beyond any effective international regulatory control, despite their clear potential to act as major contributors to marine environments of contaminants of concern to the Convention and Protocol.

The governing bodies under the London Convention and Protocol, having noted the general obligation under the Convention and Protocol to address all sources of marine pollution, agreed that there was a need for a more detailed assessment of such discharges, and to communicate this to other relevant fora, including UNEP’s Global Programme of Action (GPA) for Protection of the Marine Environment from Land-Based Activities .

Consequently, an International Assessment of Marine and Riverine Disposal of Mine Tailings was commissioned by the Secretariat. The report can be downloaded from the link to the right.

At their meeting in 2013 the governing bodies, having reviewed the assessment report, decided to gather further information on best practices, existing guidance, etc., and to continue their outreach to other international organizations dealing with this issue, before deciding on the next possible steps. Since then, several activities have taken place in cooperation with GESAMP, including an international workshop on the environmental effects of mine tailings disposed at sea, held in Lima, Peru, in June 2015. 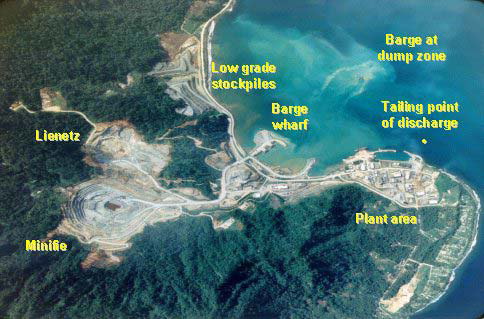 There has been renewed interest in deep seabed mining (DSM) over the last decade because of the growing demand for metals, the increasingly inaccessible and degraded land-based deposits and advances in technology.  Exploration for the three main types of mineral deposits in international waters is regulated by the International Seabed Authority (ISA) and through national legislation when a proposed mining project is located within the exclusive economic zone or legal continental shelf of a country. DSM has yet to take place in international waters, however exploration is taking place in national waters.

In 2014, the governing bodies were informed by a representative from the ISA on the objectives and workings of ISA, and noted several reports on deep seabed mining projects. The governing bodies instructed the Secretariat to contact LC/LP national focal points with a view to collecting information on regulations or best practices in deep seabed mining, for consideration by the Scientific Groups and the governing bodies, which was issued as LC-LP.1/Circ.69. Based on the responses received, and the current ongoing work within the context of the ISA, discussions have continued on how the waste assessment guidance and lessons learned within the LC/LP community can best inform deep seabed mining activities. To support these discussions, in 2016, the Scientific Groups held its Science Day on the topic of Environmental management of deep seabed mining.

The problem of end-of-life FRP boat disposal and management has taken global proportions with an increasing number of vessels needing management. This is particularly pertinent to small island developing states (SIDS) with space being a significant issue and disposal at sea having wider implications for the marine community on which people may be dependent and possible pathways to humans for plastics and associated pollutants.

The issue of end-of-life management of FRP vessels was raised by parties to the London Convention and London Protocol, specifically SIDS. This resulted in IMO commissioning a study to review and summarise currently recognised options for the disposal and recycling of end-of-life FRP boats and to identify where guidance and further work may be required. Whilst the situation of disposal of end-of-life FRP boats was considered in general terms, this study was particularly focused on the practice of at sea disposal and the magnitude of the situation as affecting management in SIDS. The final report of the study can be found in menu to the right.

This report was made possible through support from the UN Environment Global partnership on marine litter (GPML).

Hull scrapings and marine coatings as a source of microplastics


Through a recent report, the International Union for the Conservation of Nature (IUCN) identified hull scrapings, marine coatings and anti-fouling systems as potential sources of microplastics to the oceans.

The impacts of marine plastics and microplastics upon species and communities are increasingly recognised with concomitant regulation and public attention. Accordingly, through its mandate on the protection of the marine environment from shipping operations, the IMO conducted a literature review to assess current knowledge and data regarding marine coatings as microplastics sources. The final report of the study can be found in menu to the right.

This report was made possible through support from the UN Environment Global partnership on marine litter (GPML).