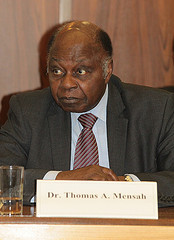 International Maritime Prize for 2012 to go to Dr. Thomas A. Mensah of Ghana, former ITLOS President and former Assistant Secretary-General and Director of the Legal Affairs and External Relations Division at IMO

Biography of Dr. Thomas A. Mensah
Dr Thomas A. Mensah was born and raised in Ghana. He graduated from the University of Ghana and then studied abroad, first taking law at the University of London, graduating in 1959, and then, in 1961, he joined Yale University Law School, United States, obtaining a Master of Laws (LL.M.) degree in 1962 and a Doctor of the Science of Law (J.S.D.) title in 1964.
Dr. Mensah then embarked on a truly international legal career, first working as Associate Legal Officer, at the International Atomic Energy Agency, Vienna from 1965 to 1966 before joining the IMO Secretariat, in London, in 1968, as Director of the Legal Office. In 1981, he was designated Assistant Secretary-General and Director of the Legal Affairs and External Relations Division, IMO, posts which he held until 1990.  He was also a visiting Professor of the World Maritime University (WMU), in Malmö, Sweden, from 1981 to1990.
On leaving IMO, Dr. Mensah became Special Advisor on Environmental Law and Institutions, UN Environment Programme (UNEP) in Nairobi, from 1991 to 1992.  He then became Cleveringa Professor of Law, Leiden University, Leiden, The Netherlands, from 1993 to 1994.  Dr. Mensah then moved to the United States where he was Professor and Director, Law of the Sea Institute, University of Hawaii, from 1993 to 1995.
Dr. Mensah was then appointed as the first High Commissioner of Ghana to the Republic of South Africa, from 1995 to 1996.
In 1996 he was appointed the first President of ITLOS, and continued to serve as an ITLOS Judge from 1999 to 2005.
He has been a Member of the Institut de Droit International since 1989, a Titular Member of the Comité Maritime International, a Member of the Advisory Council of the British Institute of International and Comparative Law and a Member of the Standing Committee on Maritime Arbitration at the International Chamber of Commerce in Paris.
Dr. Mensah has published numerous articles, monographs and papers in the field of public international law, law of the sea, maritime law and international environmental law.