A new IMO video puts the spotlight on how an IMO/EU initiative is helping cut maritime emissions in the Solomon Islands as part of a global project to help tackle climate change.

When the solar-powered LED lights go on at night in the port of Honiara, Solomon Islands, they are helping the port meet IMO maritime security requirements.

But these lights are also a shining example of how a global project, through regional centres, can help individual countries' ports and shipping sectors improve energy efficiency, cut emissions and clean up local air quality.

Eranda Kotelawala, Chief Executive Officer of the Solomon Islands Port Authority, showed an IMO team around the port, where a series of emission-cutting measures have been and are being implemented: from the solar-powered lights, to weighing in motion systems so that diesel-powered trucks do not have to stop and idle, and even repairing cracks in the road surface to help cut emissions and improve air quality.

It has been estimated that savings of up to 75% can be made in the shipping and port industries just by using existing technology and doing things a little bit differently.

Simon Wame, a ship operator based in the Solomon Islands, told IMO that MTCC-Pacific was helping him to save money – and cut emissions – by supporting a data collection system.

It's the same story for Joy Rurime, a shipowner/operator who heads a family business running one of the largest inter-island trading vessels in the Solomon Islands.

"The MTCC has given us a new opportunity to manage our operation efficiently - and also to look after the environment that we serve in," Ms Rurime told IMO.

Over on the island of New Georgia, the Port of Noro is an important tuna catching and tinning centre.

Tackling emissions at a local level is all part of the global GMN project, which is having similar impacts in all five regions where an IMO GMN Maritime Technology Cooperation Centre has been established.

MTCC Caribbean, for example, is coordinating regional efforts in two pilot projects: one to establish a baseline and cost/benefit analysis for different energy efficiency technologies and the other a system for collecting fuel consumption data.

MTCC Latin America has organised several workshops, throughout the region, to help maritime authorities and other stakeholders fulfil their obligations under IMO's international regulations on energy efficiency.

MTCC Asia is developing a software tool to help ships' crews record fuel consumption and is working on ways of optimising the angle at which ships float in the water ("trim"), to improve their performance.

MTCC Africa has developed standardized e-forms for tablets, enabling ships' crews to input key parameters, such as fuel type, fuel consumed, engine rating and so on, and then upload this via satellite to a web-based platform - where it can be processed and analysed. By the end of 2018, more than 1000 data sets had been collected.

These are global efforts, through regional and local implementation - to tackle a global problem.

"Climate change has no borders, it is a global issue. And only globally can it be tackled," Meropi Paneli, Senior policy Officer and Programme Manager, European Commission, told IMO. 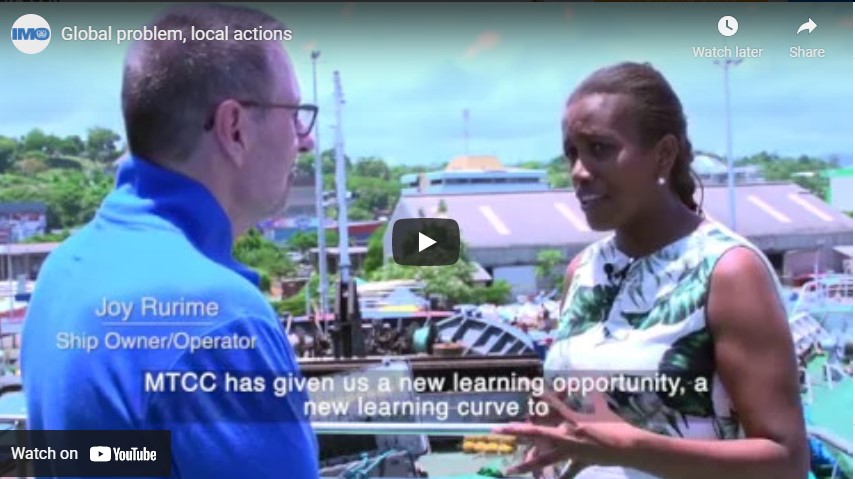 The GMN project is funded by the European Union and implemented by the International Maritime Organization (IMO).