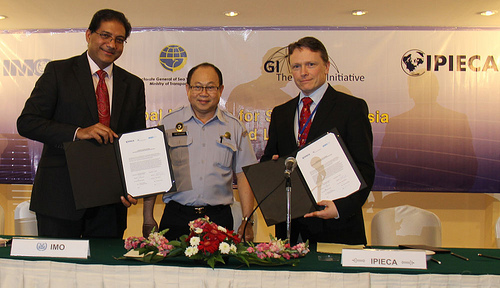 IMO and  IPIECA, the global oil and gas industry association for environmental and social issues, have jointly launched a new Global Initiative (GI) programme aimed at improving the oil spill preparedness and response capabilities in south east Asia, at a regional workshop that took place from 20 to 21 March 2013 in Jakarta, Indonesia.  The workshop and launch event was attended by more than 70 high-level representatives from Government and the maritime, oil and gas industry from countries across the south east Asia region.
The Statement of Intent on Establishing the GI-SEA Programme on Oil Spill Preparedness and Response was signed by Mr. Jose Matheickal, Marine Environment Division, IMO and Mr. Brian Sullivan, Executive Director, IPIECA, and witnessed by Captain Yan Risuandi, Director for Marine Safety and Acting Director for Sea and Coastguard of the Directorate General of Sea Transportation, Ministry of Transport, Indonesia, representing the host Government for the GI-SEA workshop.
Click here for photos.
IMO and IPIECA have, for a number of years, been working with their international and regional partners to establish this new regional programme, which demonstrates a major commitment from both Government and industry to improve oil spill preparedness and response in the region. This new joint-initiative will build collaboration and create a forum for joint action, focusing on practical activities such as training, workshops and joint exercises in the field of oil spill preparedness and response. More importantly GI-SEA will also support the objectives of the ASEAN Oil Spill Response Action Plan (ASEAN-OSRAP) being developed by the ASEAN members with the support of the IMO Integrated Technical Co-operation Programme (ITCP).
The GI South East Asia programme was initiated to address an increased level of oil spill risk due to higher levels of shipping traffic, and increased exploration and production activities across the region. A full-time Project Manager based in Singapore, employed by IPIECA, will oversee the GI-SEA programme activities.
The Global InitiativeThe GI, established in 1996 by IPIECA and IMO, continues to expand its work to reduce the level of global oil spill risk in priority locations around the world. The programme provides a body for co-operation between governments and the oil and gas industry, and through it, IPIECA and IMO work together to help countries develop national structures and capability for oil spill preparedness and response.
The Global Initiative for West, Central and Southern Africa (GI WACAF) was launched in 2006.
Websites: IPIECA: http://www.ipieca.org/topic/oil-spill-preparedness/global-initiative
ASEAN: http://www.asean.org/
GI-WACAF project: http://www.imo.org/sites/imocloud-Dev/OurWork/Environment/SpecialProgrammesAndInitiatives/Pages/The-GI-WACAF-Project.aspx